A few words on Wednesday 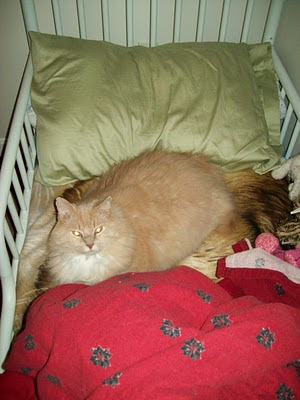 Today is the first day since I have lived here that MY mom is going to day hunting! 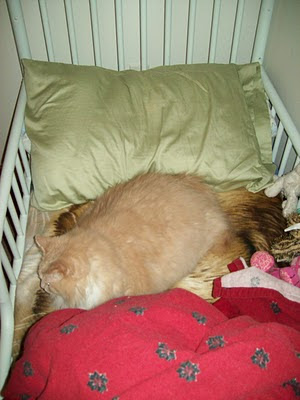 See she had to resign when she had the blurp in her belleh (so Molly tell's me). 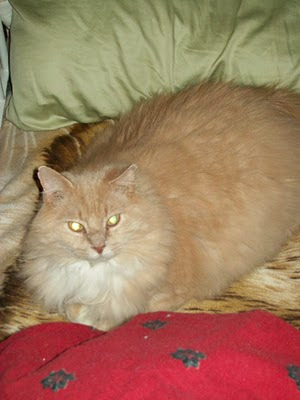 Kittehs what am I going to do without MY mom here with me all day???
clawed by The Misadventures Of Me on Wednesday, May 26, 2010 18 piles of yack

Before I tell you my story I have to say, if you think you are too far away to adopt these kittehs, you really aren't. Transportation can be arranged to the North East and also if you go to Pilots N Paw's and ask for help, they certainly can do that too. (They are a group of volunteers that fly their own planes to transport animals to good homes!)

>>> Click on the pictures to see the full profile of the kittehs.

Hai, today I has sumfin to talk about that is special to me. If you recall I was first rescued with a group called Grayson County Humane Society in Leitchfield, Kentucky. I happen to think that that place is wonderful. The beans there all love and care for us and when one of us is hurt, they all seem to hurt too. Anyway, I digress .... There are some very special kittehs (they have feline leukemia or Fiv) there that need some good homes. They are all adults (or almost adults) and find it hard to get a home because they aren't a kitten and because they have special needs. I wish all beans were able to take special needs kittehs, like MY mom and wouldnt care that we are a bit different from the rest. 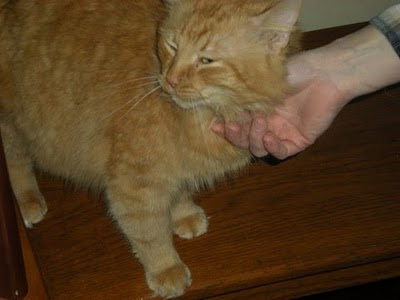 ^
This handsome ginger boy is Cap'n Mikey. He is fiv+ but that doesnt stop him from being a prankster or a lover boy! 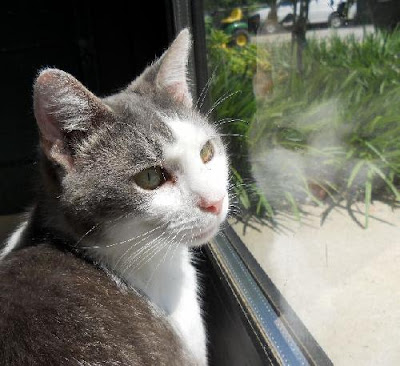 ^
This southern gentleman is Marlowe. Marlowe just became a mancat - he had his first birthday in January 2010. Marlowe is fiv + but would surely love a home to call his own. 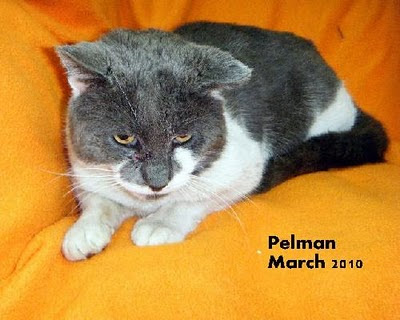 ^
Meet Pelman! He is a bit rough looking, but he's had it rough for a few years living outside without a home to call his own. Pelman has to been shown what love can do for a kitty as he is still a bit uncomfortable around people. Are you that special person? Pelman is fiv +. 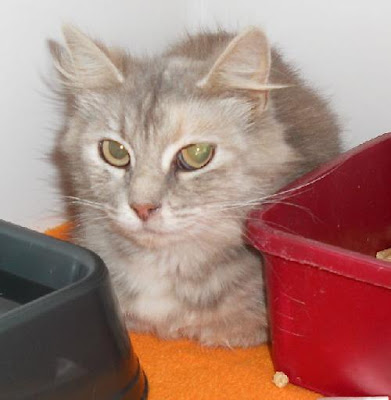 ^
Isnt Aurora beautiful?? She isn't a year old yet but will be in a few months. Wont you celebrate her first birthday with her by giving her a warm, loving home? Aurora is FeLV + and longs for a home where love is abound! 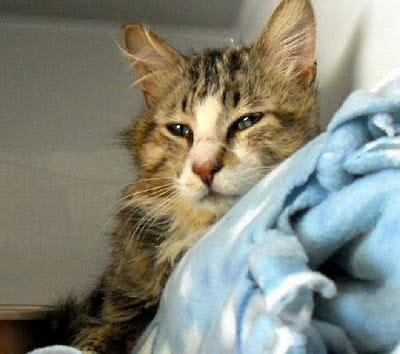 ^
This dreamy eyed guy is Joseph. Joseph is two years old and is very easy going. He likes to chillax in his cubby at the shelter but boy does he want a home of his own! Joe is FeLV+. 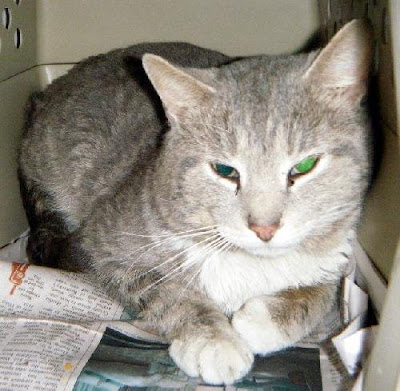 ^
I think Casey looks a bit sad in his piccy. He is about one year old and was found wandering around. He wants to get to know you better, would you adopt him? Casey is FeLV+. 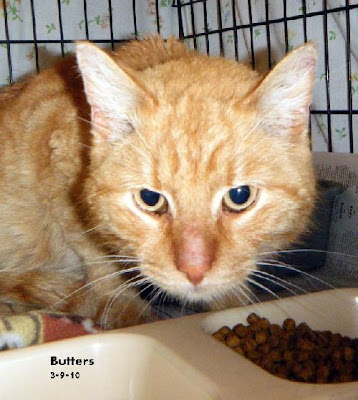 ^
This handsome ginger guy is Butters. This picture is of him the first night at the shelter. He weighed a whole 4 and a half pounds when he was brought in. Butters is a mancat of 3 years (apx). He is super special and would love a human of his own. Butters is positive for FeLV and Fiv. 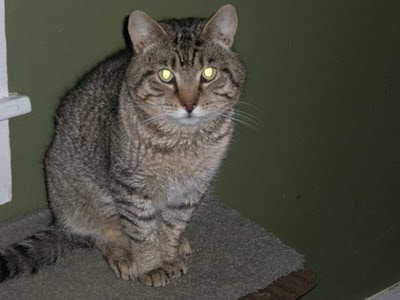 Meet Second. He is almost a geezer at apx 7 years old. He was found at deaths door thinking starving was not the way to die! Since being found, he's gained some weight and now looks foward to a retirement home. Will it be with you? Second is FeLV and Fiv +.
clawed by The Misadventures Of Me on Monday, May 24, 2010 14 piles of yack 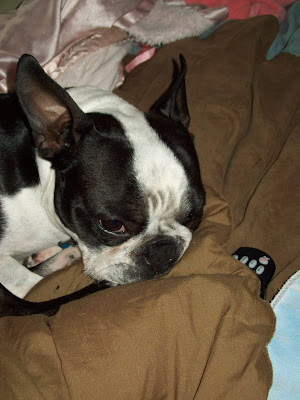 I's not feelin so gud. Mom found me shakin and stiff dis mornin - she said it was a seizure. If yoo recall I had dis issue afore I was broughted home. Well, a few sleeps ago (2 months ago) I couldnt walk right and kept falling down on my front legs. Mom has kept an eye on me and nothfin happened 'till today. So mom is not sure what ta do, she said a more natural diet might help but then again she needs to research fer more info.

Hai Kittehs! Guess what the mom did without even trin? 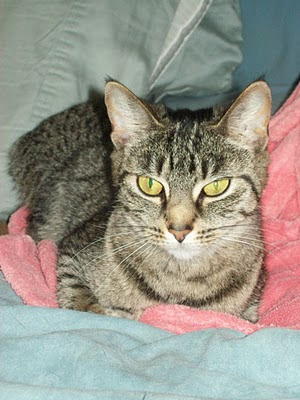 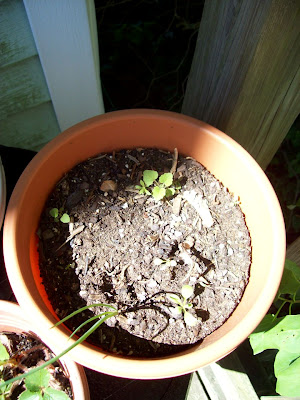 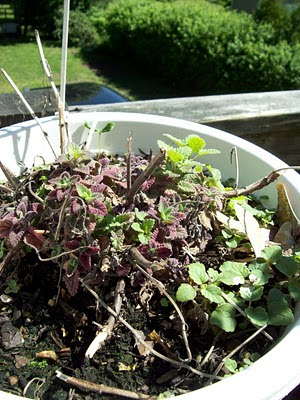 This is cat mint(wif catnip too), the mom thought it had died but after she unburied the leaves off of it, dis is what she found! 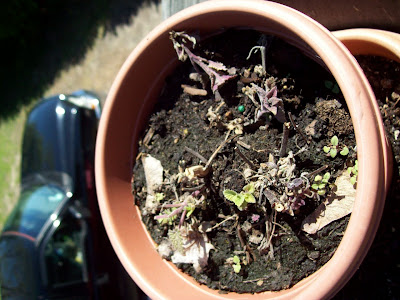 This nip grew all by itself! Wow its sum powerful stuffs!! 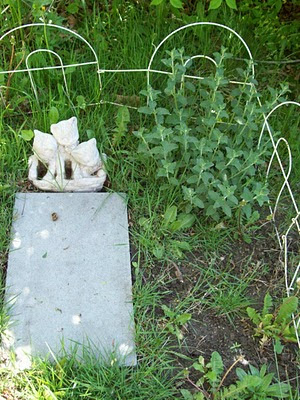 Whats even better, the cat mint on Fatty's grave grew back too! 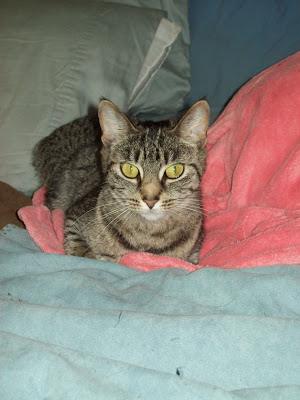 We may has EXTRA to send to furiends!! How pawsome is dat?
clawed by The Misadventures Of Me on Tuesday, May 18, 2010 12 piles of yack 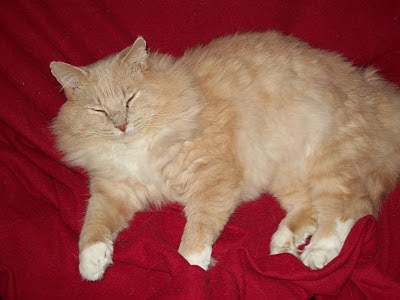 OMC! Mom has been taking care of this girl kitty and I love to wait by the door for her. MY mom calls her Coco. She is the stray kitty that the stupid donkey butts beans next door didnt want anymore cuz they said she isn't friendly. 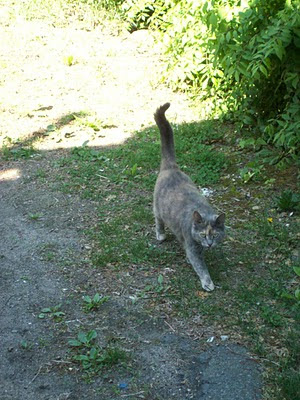 Here she is, following MY mom around the yard. She even tries to follow her to the end of the walkway when the bean girl gets on the big yellow machine. MY mom is smart though, she tells Coco "Back" and she turns around and sits at the door waiting for MY mom. 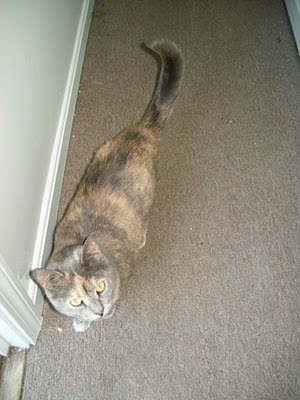 Isn't she a dream girl kitty? She is very lovable and would make someone a purrfect fur kid. She will take patience because she is very shy of beans. MY mom won her over in no time and even now the big male guy can get Coco to roll over and show her belly. I think I maybe in love!
clawed by The Misadventures Of Me on Monday, May 17, 2010 17 piles of yack

Kittehs, meet Hyota! Hyota is a 14 year old Rock Squirrel that lives with a Japanese family way far away. You can see Hyota on YOUTUBE or their BLOG. For our English only furiends, the blog is in Japanese so you may want to use a translator to read it. 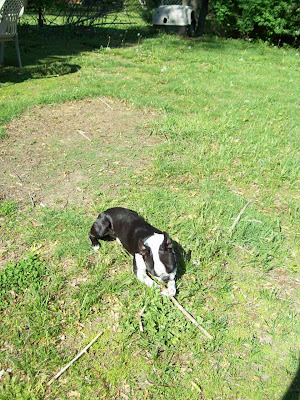 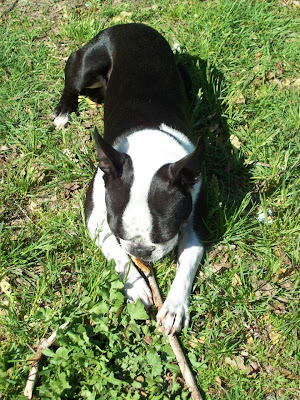 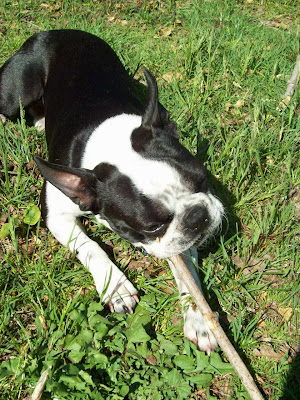 Hai look, ALMOST Frootbats! I jus get so in to chewing sticks that my Frootbats just usually flop!
clawed by I is Jake on Friday, May 14, 2010 13 piles of yack 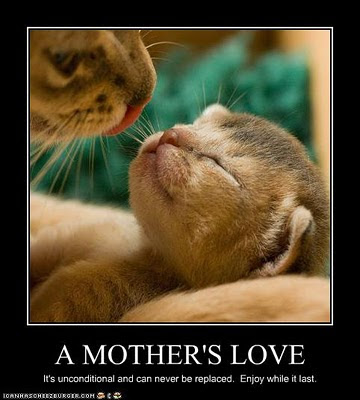