Halloween fashion show fer us all.

And dun ferget to get all dressed up fancy fer Miss Peach and Mickey's wedding.
clawed by Unknown on Saturday, October 31, 2009 18 piles of yack 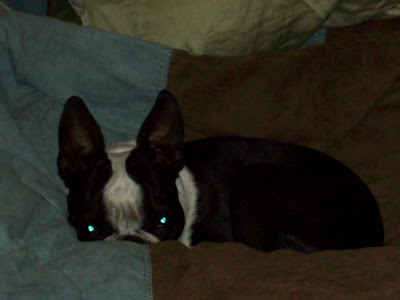 The mom has been busy trin to find a day hunting fing. She says she has to or us kittehs, er furrys will be hungrys. We is sorry dat she has been too busy to helps us. Da good news is dat today she has an interview! 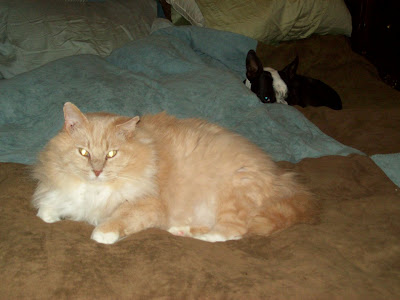 And here I is sharin Mom and Dad's bed wif Troo. He doesnt seems to mind - too much!

Karen Jo gavedid us this awardie! Please accept this award from us to all of yoo (is so hard to just give it to just one of our furiends.) Mom had Google translate it fer us - This blog and a dream. Fanks so much fer dis Awardie!
clawed by I is Jake on Friday, October 30, 2009 13 piles of yack

Mancat rule:
Sometimes you gots to let the blurp learn how to play (NICELY) with you.

me with the blurp on mom's lap 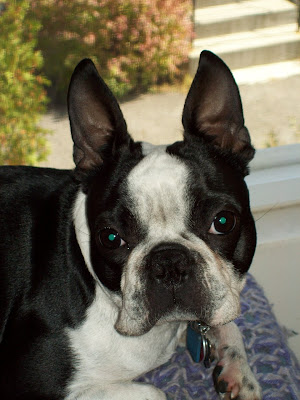 Frootbats I has em!
And glowy green eyes too!!

Email ThisBlogThis!Share to TwitterShare to FacebookShare to Pinterest
Labels: Boston Terrier, Frootbat Friday, I can sit in the kittehs chair, Im a kitteh too, Jake

7 Years ago, this is what we looked like - Shadow was almost deaded when he was found and I was a feisty bugger the mom says

Shadow now - He has grownd up a lot since then!

Molly this morning
I knows I wasnt suppose to be doin dis but the mom said it was ok - this once.

We had a bad start. Our mom kitty and us were dumped behind a pub in the town where the mom lived. Shadow was found first and a few days later the mom was able to catch me. I was FAST!

Now I get to announce my weight. I was surprised when my mom told me what the machine said:

My weight was taken by a Wii Fit Board this morning, this is the picture of what the television said I weighed. 15 POUNDS?? And my Mom thought I weighed more than that! MOL

If you kitties would have your beans email us at ttgrrl AT gmail DOT com and tell us your snail mail addy, we will get that sealed in fresh nip goodness to you!

Happy Thanksgiving to all our Canadian furiends!
clawed by Unknown on Monday, October 12, 2009 24 piles of yack

Email ThisBlogThis!Share to TwitterShare to FacebookShare to Pinterest
Labels: 7th Gotcha and Purrthday for Molly and Shadow, Mancat Monday

My ONE year Gotcha Day!

Hai Kitty blogging friends! Today is my ONE year Gotcha Day!! I am so happy to be in my furever home and I love MY mom so much! You can read my story HERE.

These two pictures(above) are when I lived in Leitchfield, Kentucky with the Grayson County Humane Society.

This is my official adoption paper, from N.O.A.H - Nemasket Orphaned Animal Haven,Inc. My mom has it kept in a special place and says I am really special too!

This picture is of me when I first came to my furever home with my Mom. I had icky eyes, sneezes and a runny nose. My mom took care of that for me with warm wet clothes and lots of love. I hate the warm wet clothes though!

Hai Kittehs, what can we say We LUB Wilber!

Its a BIG Gotcha/Purrthday weekend!

Hello our blogging readers. Sir Trooder Lioncourt here. It is a very big weekend here at our house. On Sunday, October 11, I will have been here with MY mom for a whole YEAR! Can you believe it? When I came here I was a mere 11 pounds. Care to guess what I weigh now? The first one to guess right (or close without going over) will get some of our fresh nip and cat mint (yes the mom still has it growing for us)! Leave me a comment below.

Fank yoo Troo! Den on Monday October 12, it will be our 7th Purrthday / Gotcha Day! See, the mom does not remember da exact date dat we was rescued by her's. So in order fer it to be membered easier, she said dat it wud be super special to has that day on Shadow's boy beans birthday!

My boy bean will be 16 whole years old on dat day this year! Can yoo believe we has been wif him almost half his life? We fink its pretty pawsome dat we share his day wif hims!
clawed by Unknown on Thursday, October 08, 2009 22 piles of yack

Simon continues his noble yet relentless quest to end cardboard balloon infestations. 100 spheres of doom dispatched in a paltry 77 seconds!

And dis is Tillman, he loves to skateboard and surf and um all dat bean stuff ...

clawed by The Misadventures Of Me on Saturday, October 03, 2009 10 piles of yack

Can yoo help or know of help?

Mom here, On Facebook there is a Sanctuary page called PurrEver Ranch Sanctuary from Tennessee. The lady was reaching out to others who can possibly help and in turn so am I. Please take a minute or two to read this letter.

Like most rescuers, I receive all sorts of letters & calls from humans full of excuses, not wanting to solve a problem but just "get rid of" their pets. Below is the the most touching email I have ever received. Please if you can, help this dear woman. (I have agreed to take two...not much but one by one we can home these babies & let this Rescuer rescue herself.)

I will happily drive to AL & fill my jeep up with cats & bring back should they have homes in this area.

All we can do on this earth is help one another. We never know when the next outstretched hand or paw might be our own. Paw it furward.

with much love & hope,
rita

i am a rescuer. i have 40ish cats/kittens. some tame, some feral or tame only to me. i am 35 miles south of tuscaloosa al. i have a 100 ft by 100 ft outdoor cat enclosure for them with a 14 by 16 wood sided/tin roof building with heat/air cond. furniture, cat trees in it. they also have a primitive tin building with small loft. alot of the grass is dead so they are in wet dirt when it is wet which i hate. they also have a ramp into a cat door into a bedroom of my doublewide trlr they can come into. i also have about 16 in the house and my hubby is fussing b/c i can not keep it clean.

i love all my cats. i have placed into rescues and/or perm homes over 60 since dec. 08 when i found out i have incurable breast cancer with bone mets.

i am physically unable to pick up litter or bags of cat food over 10 lbs. these eat 4 18lb bags of purina a wk plus can food daily. i used to have to buy 8 bags a wk. i no longer have the money for too much b/c of my medicine and medical bills. when i get into chemo at some point i will be unable to handle all the cats and litter boxes. i use throw away boxes for litter now so i can trash and put out new ones daily. is there anyway you can make room for some of my cats? they are spayed/neutered and had their shots. i worry daily about them.

i can provide at least $100. a month towards their care and if i die will have some of the insurance money sent your way. i have no idea how long i have. i love the fact yours have cat areas and are not caged. here is a site with pics of some enclosures. http://www.just4cats.com thank you so much and hope you can help me in some way. i am very nervous and anxious b/c of the cancer and the unsure future of my cats. Donna Goss 205-239-4498 cell d.goss@mchsi.com

i am on the board of a new small shelter here but they have no luck placing kitties but the pups/dogs all get into rescues. i also have been on other rescues boards. i am not a hoarder but had less than 10 cats when i met a woman who traps ferals or tame and pens them and they get no socializing and end up feral and then she eventually kills them when its time to spay/neuter. i for the last 3 yrs or so brought many she caught here to get them out of that situation, she has no heat/air for them. some have lived in carriers or traps. i move her tame babies as i can but now since i am sick i can no longer help them get away from her. thanks for your time. i hope you can help. Donna
End of Email:


"Think occasionally of the suffering of which you spare yourself the sight."
~ Albert Schweitzer

The mom, da blurp Hailey and the big male bean wentdid to Roger Williams Park Zoo last week. They left us fer like a squillion hours and didnt brings home nuttin fer us. They did show us dis piccys -

Harbor Seal hidin under water we is finkin

Da blurp Hailey, meowin at a piggy
(MOL we has her trained well!)

Dat is a miniature donkey, we is wonderin if it wud take Jake in fer a bit?

Giraffes is big, see dat door over dere - they dun has to duck under it either!

and da Snow Leopard
It was lonely lookin da mom said, it had no other leopard to play wif in dere dat she cud see.
clawed by Unknown on Thursday, October 01, 2009 11 piles of yack